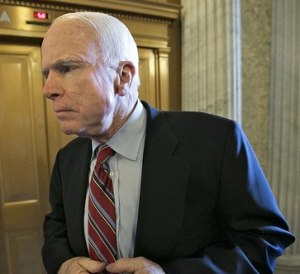 (Starting at :51 in the video) A Syrian woman delivered an emotional plea to McCain. “For me, to listen to you say there is no good option in Syria—I refuse to believe that,” she told him. “The good option right now is to take Saudi Arabia and Iran and force them to stop supporting the two sides in Syria. And you could do it. You can do it by diplomacy, not bombs, Sen. McCain. We cannot afford to shed more Syrian blood.”

FACT: Our own State Department’s official website has a dire warning for Americans to avoid travel in Syria because of the rebel groups. A warning from March of this year states, “There is also a threat from terrorism, including groups like al-Qaida in Iraq (AQI) affiliated al-Nusrah Front. Since November 2011, al-Nusrah Front has claimed nearly 600 attacks – ranging from more than 40 suicide attacks to small arms and improvised explosive device operations…”