It appears to be the opinion of reasonable men and women that Philando Castile was murdered by a trigger happy police officer. This is a sad day. There are far more skillful writers to hear from, so I’ll simply post the evidence as I see it with quotations from other thoughtful articles. 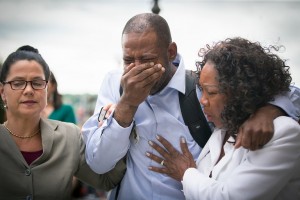 The civil authority must be held accountable when she murders the citizens she is commissioned to protect.

If you read carefully [from the transcript of the encounter], you’ll note that it appears that the officer shot Castile for doing exactly what the officer told him to do. Yanez asked for Castile’s license. Castile told him that he had a gun, and the officer – rather than asking for his carry permit, or asking where the gun was, or asking to see Castile’s hands – just says, “Don’t reach for it then.” At that point, Castile is operating under two commands. Get his license, and don’t reach for his gun. As Castile reaches for his license (following the officer’s orders), and he assures him that he’s not reaching for the gun (also following the officer’s orders). The entire encounter, he assures Yanez that he’s following Yanez’s instructions.

He died anyway… From David French in National Review.

Beyond racial injustice, does our nation suffer from a pro-authority prejudice or a blind allegiance to The State?

The fact that even the two black jurors voted to acquit Ofc. Yanez makes me wonder if this verdict is not (or not simply) an expression of racial prejudice, but is rather a symptom of latent pro-authority prejudice when it comes to law enforcement. Hear me out on this, because my usual stance is to be supportive of the police unless given reason otherwise, and I still think that stance makes general sense. But it can become an excuse for wrongdoing and even criminal misconduct.

What brings this to mind, believe it or not, is the fact that here we are 14 years after the start of the Iraq War, and the United States government is finding fresh ways to dig the country into war in the Middle East — this time, risking a proxy war with Russia over Syria. And there’s no protest anywhere! You’d think people would be tired of all this fighting, and be asking hard questions in public of why our government, no matter which party holds power, backs endless war… From Rod Dreher in American Conservative.

There have been unofficial statements condemning this verdict from prominent NRA members, but the organization needs to issue some sort of unified statement. More on the NRA ‘response’ here.

Another article on the failure of the NRA: http://reason.com/archives/2017/06/21/the-nra-shuns-a-second-amendment-martyr

The civil authority must be held accountable when she murders the citizens she is commissioned to protect.

Thoughts from a man who trains cops:

…The bigger mistake, in my opinion, was made by Officer Yanez.  He appeared to panic when confronted by the fact that the driver he stopped was armed and didn’t seem to be paying proper attention to his verbal commands.  He probably didn’t need to shoot Mr. Castile, but I feel reasonably certain that the officer felt that he had no other option.  That is the predictable result of poor training, possibly combined with poor hiring practices on the part of Officer Yanez’ agency.  People prone to panic should not be hired as cops….