A meteor streaked across the sky and exploded over Russia’s Ural Mountains with the power of an atomic bomb Friday, its sonic blasts shattering countless windows and injuring nearly 1,000 people. (Scroll down for reaction from Paul Krugman.)

The spectacle deeply frightened many Russians, with some elderly women declaring that the world was coming to an end. Many of the injured were cut by flying glass as they flocked to windows to see what the source was for such an intense flash of light.

The meteor — estimated to be about 10 tons — entered the Earth’s atmosphere at a hypersonic speed of at least 54,000 kph (33,000 mph) and shattered into pieces about 30-50 kilometers (18-32 miles) above the ground, the Russian Academy of Sciences said in a statement.

Not everyone was frightened. If hurricanes are good for the economy, just imagine… 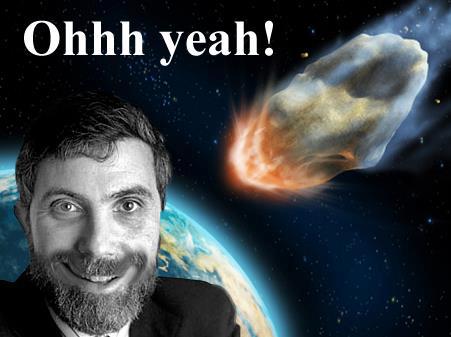 from The Nerdy Libertarian