In a stunning first for neuroscience, researchers have created an electronic link between the brains of two rats, and demonstrated that signals from the mind of one can help the second solve basic puzzles in real time — even when those animals are separated by thousands of miles.

Here’s how it works. An “encoder” rat in Natal, Brazil, trained in a specific behavioral task, presses a lever in its cage to earn a reward. A brain implant records activity from the rat’s motor cortex and converts it into an electrical signal that is delivered via neural link to the brain implant of a second “decoder” rat.

This is where things get interesting. Rat number two is in an entirely different cage in North Carolina. The second rat’s motor cortex processes the signal from rat number one and — despite being unfamiliar with the behavioral task the first rat has been conditioned to perform — uses that information to press the same lever!

Read more about this telepathic link at IO9.com.

If you haven’t heard, apparently we’ve got that whole invisibility cloak thing down too – only it’s a secret of the US government (via a Canadian camouflage company)…until now.

Dr. Baile Zhang from Singapore unveiled his own invisibility cloak (or rather, box) at a TED conference in Long Beach, Calif, where he explained that he constructed the invisibility machine “just for fun” after coming up with the idea in 2010.

But creating a life-sized cloak would prove more difficult: Dr. Zhang’s disappearing box was developed by attaching two pieces of calcite, a carbonate mineral that can bend light. While it is possible to create a larger version of his invention, it would not be feasible to create a garment out of the dense, colorless mineral.

For now, the scientist is working on creating a larger version of the invisibility box, one that is “as large as possible”, he told Boing Boing.

On another invisibility front, invisible motion is now able to be tracked on film. The amplification process is called Eulerian Video Magnification, and is the brainchild of a team of scientists at the Massachusetts Institute of Technology’s Computer Science and Artificial Intelligence Laboratory.

The team originally developed the program to monitor neonatal babies without making physical contact. But they quickly learned that the algorithm can be applied to other videos to reveal changes imperceptible to the naked eye.

“Once we amplify these small motions, there’s like a whole new world you can look at,” he said.

Dark Matter May Not Exist

These days, dark matter is a firmly established principle of cosmology; most of the questions now focus on how the stuff is distributed through the universe, and which of many possible subatomic particles it’s made of.

Most of the questions, but not all. Ever since the early 80’s, a competing theory has been struggling for acceptance. Known as MOND, for Modified Newtonian Dynamics, it posits that dark matter’s main effect — allowing galaxies to spin faster than they should — isn’t caused by extra stuff, but instead by a change in how gravity works under certain conditions.

And finally, for your enjoyment, the exquisite…hummingbird moth: 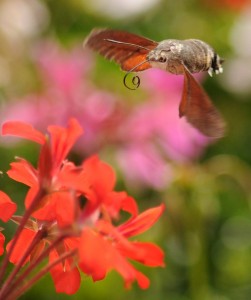 Look out for more science-related news and alerts by following my page: