Did President Obama’s efforts to bomb Syria just go down in flames? In a lengthy–and sometimes odd (I’m still an internationalist)–speech, Senator McConnell just laid out his opposition to military strikes on Syria. It’s doubtful that Senator Rand Paul agrees with everything stated by Senator McConnell in his speech, but clearly Paul’s awkward relationship with McConnell has borne fruit.

Update: The Senate continues to debate military strikes on Syria LIVE on C-SPAN.
Sec. Kerry is getting brutalized and grilled in LIVE hearings now:

Here is a synopsis with emphasis added: WASHINGTON, D.C. – U.S. Senate Republican Leader Mitch McConnell made the following remarks on the Senate floor regarding the President’s Syria resolution and the ‘Russian diplomatic gambit to forestall U.S. military action’: 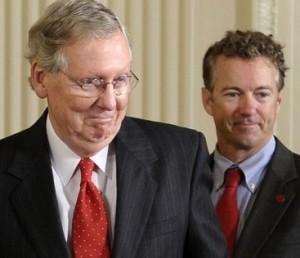 “First, I’d like to welcome the President to the Capitol today. Members on both sides of the aisle are eager to hear from him, and to share their own thoughts. We look forward to a spirited and constructive exchange…

“For about two years now, Syria has been mired in a ferocious civil war, with more than 100,000 killed with conventional arms, according to U.N. estimates. This tragic situation has prompted many to look to the United States for help. And so one year ago, President Obama made a declaration: if Assad used or started moving chemical weapons, he’d do something about it.

“Well, as we all know, on August 21 of this year, that red line was crossed. The President’s delayed response was to call for a show of force, for targeted, limited strikes against the regime. We have been told that the purpose of these strikes is to deter and degrade the Assad regime’s ability to use chemical weapons.

“Let’s take a closer look at these aims.

“But let’s be very clear about something. These attacks, monstrous as they are, were not a direct attack against the United States or one of its treaty allies. And just so there’s no confusion, let me assure everyone that if a weapon of mass destruction were used against the U.S. or one of our allies, Congress would react immediately with an authorization for the use of force in support of an overwhelming response. I would introduce the resolution myself…

“Second, in the course of administration hearings and briefings over the past several days, Secretary of State Kerry has revealed that Assad has used chemical weapons repeatedly over the last year. So there’s a further question here about why the administration didn’t respond on those occasions.

“Third, Assad, as I’ve indicated, has killed tens of thousands of people with conventional weapons. Is there any reason to believe he won’t continue if the President’s strikes are as limited as we’re told they’ll be?

“Fourth, what if in degrading Assad’s control of these weapons you make it easier for other extremist elements, like those associated with the Al Nusrah front and Al Qaeda, to get hold of them?

“Or what if by weakening the Syrian military, you end up tilting the military balance toward a fractured opposition that’s in no position to govern or control anything right now? I think the Chairman of the Joint Chiefs, General Dempsey, put this particular issue best when he recently suggested in a letter to Congress that the issue here isn’t about choosing between two sides in Syria, it’s about choosing one among many sides, and that, in his estimation, even if we were to choose sides, the side we chose wouldn’t be in a position to promote their own interests or ours.

“And then there’s the question of how Assad himself would react to U.S. action in Syria. If Assad views an air campaign as preparation for regime change, then he may lose all constraint in the use of his arsenal, chemical or otherwise, and lose any incentive whatsoever to move to the negotiating table. It’s very clear that the unintended consequences of this strike could very well be a new cycle of escalation, which then drags us into a larger war that we’re all seeking to avoid. Some have even suggested that the humanitarian crisis surrounding the Syrian Civil War could actually be made worse as a result of even targeted U.S. strikes. In the end, then the President’s proposal seems fundamentally flawed, since if it’s too narrow it may not deter Assad’s further use of chemical weapons. But if it’s too broad, it risks jeopardizing the security of these same stockpiles, potentially putting them into the hands of extremists.

“And that’s why I think we’re compelled in this case to apply a more traditional standard on whether to proceed with a use of force, one that asks a simple question: does Assad’s use of chemical weapons pose a threat to the vital national security interests of the United States? And the answer to that question is fairly obvious: even the President himself says it doesn’t.

“Now, one could argue, as I’ve suggested, that there is an important national security concern at play, that we have a very strong interest in preserving the credibility of our Commander in Chief, regardless of the party in power, and in giving him the political support that reinforces that credibility. This is an issue that I take very seriously. It’s the main reason I’ve wanted to take my time in making a final decision.

“But ultimately, I’ve concluded that being credible on Syria requires presenting a credible response, and having a credible strategy. And for all the reasons I’ve indicated, this proposal just doesn’t pass muster.

“Indeed, if through this limited strike the President’s credibility is not restored, because Assad uses chemical weapons again, what then? Add new targets aimed at toppling the regime which end up jeopardizing control of these same chemical weapons stashes — allowing them to fall into the hands of Al Qaeda or others intent on using them against the United States or our allies. Where would the cycle of escalation end?

“In Syria, a limited strike would not resolve the civil war there. Nor will it remove Assad from power. There appears to be no broader strategy to train, advise, and assist a vetted opposition group on a meaningful scale, as we did during the Cold War. What’s needed in Syria is what’s needed almost everywhere else in the world from America right now: a clear strategy and a President who is determined to carry it out…

“As I’ve said, this decision was not easy. When the President of the United States asks you to take a question like this seriously, you do so. Because just as our credibility in Syria is tied up with our credibility in places like Iran and North Korea, so too is the credibility of the Commander in Chief tied up, to a large extent, with America’s credibility in general. There’s no doubt about that. So let me repeat: I’ll stand shoulder to shoulder with this President or any other in any case where our vital national security interests are threatened, our treaty allies are attacked, or we face an imminent threat…

“I have never been an isolationist. And a vote against this resolution shouldn’t be confused by anyone as a turn in that direction. But just as the most committed isolationist could be convinced of the need for intervention under the right circumstances when confronted with a threat, so too do the internationalists among us believe that all interventions are not created equal. And this proposal just does not stand up.

“So I will be voting against this resolution. A vital national security risk is clearly not at play, there are just too many unanswered questions about our long-term strategy in Syria, including the fact that this proposal is utterly detached from a wider strategy to end the civil war there, and on the specific question of deterring the use of chemical weapons, the President’s proposal appears to be based on a contradiction. Either we will strike targets that threaten the stability of the regime — something the President says he does not intend to do — or we will execute a strike so narrow as to be a mere demonstration…