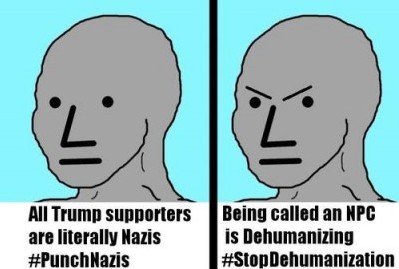 The meme is taking on a couple different forms.

Level 1: Folks are creating (the cheaper the paint program the better) and sharing NPC memes on social media.

Level 2: Be the meme. This is the one that appears to be the most triggering.

Now, if you’ll remain very still—we don’t want it to get banned—let me direct your attention to a real-world example of a Level 2 NPC meme in its natural environment. Observe:

Thank you Hillary! We don’t deserve you! Orange man is so bad. #resist #metoo

First, a little history. An NPC is a non-playable character within the world of a game. I’m not a gamer, but you may recall encountering characters with stock responses from back in the day. I guess Zelda II comes to mind. You know, that village person you run into that gives you a clue to help you on your quest?

Most of the NYT’s article is rather innocuous, except for one little detail that appears to confirm that Twitter officially interveined to censor the satirical meme.

Twitter responded by suspending about 1,500 accounts associated with the NPC trolling campaign. The accounts violated Twitter’s rules against “intentionally misleading election-related content,” according to a person familiar with the company’s enforcement process. The person, who would speak only anonymously, was not authorized to discuss the decision.

So the NPC meme has popped up as a way for conservatives to make fun of progressives who seem to always have a pre-scripted response to anything that happens in life. Think buzzwords and phrases like, “the patriarchy,” “white supremacy”,  “Russian bots,” “you’re invalidating my experience,” or the always relevant, “This. Is. Not. Normal.”

Come to think of it, the “Russian bot” accusation becomes particularly funny when you realize the NPC meme is simply a mirror image of it.

But hold on a second. We are on the verge of a trade war with China and the establishment is finally waking up to the fact that Saudi Arabia is a murderous dictatorship. Why is a silly grey-faced meme being written about in the freaking New York Times? What a joke of a paper!

And that might be it. Jokes are not allowed on the left these days. We are living in a world where actual people–that you know–think that Donald Trump openly asked, on live television, for Vladimir Putin to hack into Hillary’s emails. Something that was clearly a joke during the 2016 campaign is taken as incriminating evidence that should lead to impeachment.

We are living in a world where some leftists think it’s reasonable to go around saying it’s okay, even a good thing, to “punch Nazis.” A world where the previous DNC/NPC candidate recently stated,

You cannot be civil with a political party that wants to destroy what you stand for, what you care about.

Sow the wind, and they shall reap the whirlwind.

The amusing whirlwind, thus far, being the NPC meme.

Ever the capitalist, here’s my challenge…

#NPC Challenge: If I raise $50+ in downloads on my bandcamp page, I’ll get this yard sign up outside of my local polling location, with pics. *You pay what you want: https://t.co/oT3IDjoKgD pic.twitter.com/X0ZSrzTlGw

I think the “spreading election disinformation” accusation is weak and certainly not the main take-away from the NPC phenomenon. The big story, here, is Twitter, once again, censoring free speech.

Some news: over the weekend, Twitter suspended ~1,500 accounts associated with [spins wheel] a gaming-derived meme campaign that was spreading election disinformation. https://t.co/feRALRI77i

If you want to go further down the rabbit hole, this dude posted a response to me with his video. Check it out if you want to see just how nerdy this whole thing can get!

Here’s my explanation of the metaphysical underpinnings for the #NPC meme.https://t.co/KeTnbdeaX4

So-called progressives are actually wasting time compiling lists of NPC’s. Wonder if they’ll force them to wear little stars on their shirts or relocate to ‘camps?’
A Twitter List by GabbiZamudio

Language Warning on this one…I’ve been wondering if Sargon of Akkad is part of this meme’s rebirth? Regardless, it appears he’s trying to use it to further his goal of getting President Trump to tweet about #GamerGate. At this rate, with the NYT jumping on board, I don’t think a Potus RT is out of the range of possibilities.