Typical big government incompetence is on full display in the report just released by Inspector General Michael E. Horowitz detailing the FBI’s usage of the (badly named) ‘Patriot Act’ spying authority. Here’s the kicker. The report casually notes that it has led to zero developments in terrorism cases. Here’s an actual screen shot from the partly classified document: 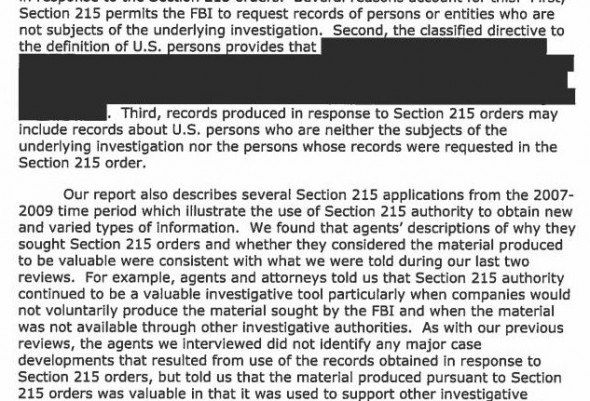 “agents…did not identify any major case developments that resulted…”

ACTIVISM ALERT: Even if the ‘Patriot Act’ survives Sunday evening (when it is set to expire), this is an important time and opportunity to galvanize opposition against these illegal and unethical programs. Will you make a donation right now to help us bring the fight to the establishment? Click here to learn more.

Citizens who want the ‘Patriot Act’ to sunset, need to call their representatives and demand that they vote ‘No’ on any reauthorization. > Capitol Switchboard: (202) 224-3121

The report also notes that it has taken over five years for the FBI to implement mandated privacy reforms.